How to Remove Engine Deposits

Has your car lost some horsepower? Is your fuel economy lower than it should be? Having trouble passing an emissions test?

Any of these problems could be the result of one very common cause: engine deposits.

What Are Engine Deposits?

Engine deposits are the gunk and grime that collect on the internal surfaces of an engine, particularly on the valves, fuel injectors, and combustion chamber walls.

If you’re wondering what the deposits are made of, they usually have a high concentration of carbon. That’s why they’re often referred to as “carbon deposits.” Carbon is black, so if you could see inside your engine, the carbon deposits would be very obvious and easy to spot. Think charcoal or soot.

Deposits come from the fuel and/or oil inside your engine. If the fuel isn’t burned up completely, the residue can stick to the internal engine surfaces. The fuel is where the carbon comes from: gasoline is a hydrocarbon, meaning it’s made from hydrogen and carbon. The carbon is a lot heavier and more solid than hydrogen, which is why it sticks around as a deposit.

Motor oil is also a hydrocarbon, but it’s not designed to burn as easily as gasoline. So if your engine is burning oil, that will usually add to the problem of carbon deposits.

Impurities in the fuel can contribute to the problem of engine deposits. The impurities can keep the fuel from burning cleanly, and they can build up as engine deposits themselves. Unfortunately, a lot of gas today isn’t as clean as you’d hope it would be. Some gas is better than others, but it’s not like the average consumer can look inside the pump and tell whether they’re getting a high-quality product or not. Plus, some standard features of modern gasoline (like the addition of ethanol) can have some negative consequences (like absorbing water into the fuel). Because of these inherent problems, it’s likely that most cars will develop engine deposits at some point. 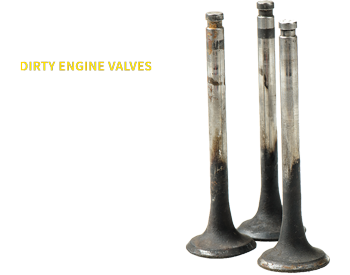 Well, they certainly don’t help. Engine deposits can cause a number of issues, including:

It’s best to take care of the engine deposits and address these problems, especially because there’s an easy way to do so.

Since engine deposits are located inside the engine, it might seem like they’d be a particularly tough problem to fix. Disassembling, cleaning, and reassembling an engine is not a simple job, and paying someone to do it is not cheap.

The good news is, you can skip all that. Instead, simply pour a bottle of Motor Honey Complete Fuel System Cleaner into your gas tank. As you burn through the tank, the fuel system cleaner will burn off the deposits, and clean your injectors (or carburetor) and intake valves. It’s ridiculously easy, and costs just a few dollars. And unlike some lower-quality fuel system cleaners, you don’t need to buy a bottle with every fill-up. All you need is one bottle every few thousand miles, to clean up the new deposits that can form in that amount of time.

You can find Motor Honey Complete Fuel System Cleaner in these stores. If your favorite store doesn’t carry it, feel free to complain to the manager and ask that they put it in stock.